The Fast and the Furious will always be one of my favorite movie franchises. Feel free to tweet me your disappointment and judgement of my movie choices but I will never get tired of going to a theater, selling my soul for a bucket of popcorn and being immersed in a thrilling couple of hours of high speed car chases and characters that have grown to be a family throughout their wild and extremely unbelievable existence. With each movie the stunts are more insane, the vehicles are more extravagant and the soundtracks are packed with hits that sometimes find their way on Billboard charts and every award show stage (Can we all sigh a breath of relief that the radio isn’t overplaying “See You Again” anymore?).

Aside from Wiz Khalifa and Charlie Puth’s heart and record breaking single “See You Again”, Furious 7 supplied numerous bops that received a lot of play from me during that time. With a new installment coming to theaters in a few months, another collection of party records and background music for Vin Diesel and his fam’s reckless adventures is due. A track listing for The Fate of the Furious soundtrack came out on Wednesday and it looks lit. 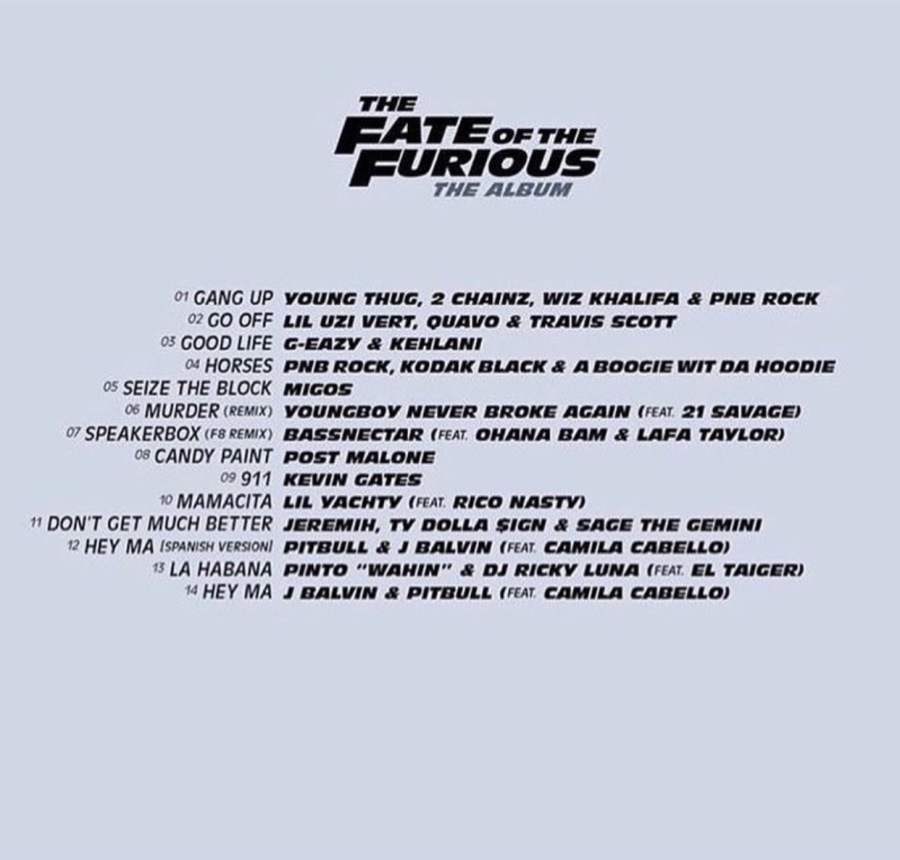 With appearances from the winning rap trio (Migos “Seize The Block”), an ex Fifth Harmony member gone independent (“Hey Ma” also featuring J Balvin and Pitbull), and so many dope artists that I have no doubt will supply some successful hits for months to come. I’ll definitely be in a theater on April 14th to catch The Fate of the Furious and I’ll be checking out the soundtrack when it drops on the same day.

Are you excited for a new edition to the Fast and Furious franchise? Let me know in the comments!