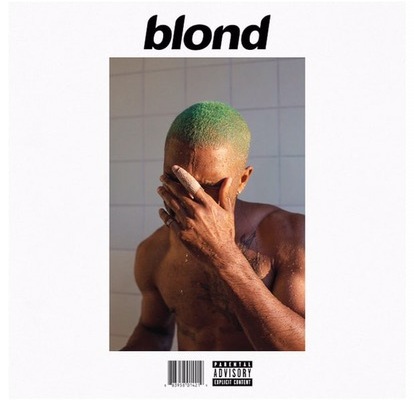 When artists release a debut album as incredible as Frank Ocean’s Channel Orange their status in the music industry seems to change overnight. Suddenly your sought out to pen for the best in the game and fans are clamoring for the next body of work they can get lost in. Channel Orange became an instant classic gaining critical and commercial acclaim with many people including me relating to the an artist finding his identity through his music and sharing some of his journey for anyone willing to listen. It has been a challenge waiting for Frank to craft his next masterpiece but after four years and numerous past due dates we have his sophomore effort titled Blond.

The Apple Music exclusive dropped on August 20th a day after Ocean released a visual project called Endless. The 45 minute video showed the New Orleans crooner building a staircase while unreleased music played in the background. While the reception for the artistic piece was mixed, I appreciated hearing his musical process and collaborations with amazing artists like Jazmine Sullivan, Sampha and James Blake. But let’s get back to the point of this post, Blond is finally out and if you haven’t heard it with your own ears yet, I’m sure you’ve read the positive reviews from critics and people from Twitter since it dropped this weekend.

Instead of racing to post another glowing review for this 17 track body of work without having some time with it, I wanted to reflect on my numerous plays of this album because I took a lot from this album. One of my favorite things about Frank Ocean’s music is his ability  to turn his personal experiences to songs that can be universally felt and understood. You don’t have to be gay to relate to the feeling of being misunderstood on “Bad Religion”. A bank account with never ending zeros isn’t needed to see that money doesn’t buy happiness on “Super Rich Kids”. Ocean definitely topped my expectations with this album and has tapped even deeper into his emotions with Blond. Let’s get into this album:

Nike: Materialism is the theme of the moody opener for Blond. “These bitches want Nike / They looking for a check / Tell em it ain’t likely,” Ocean sings through distortion. Some feel the need to base all of their self worth and value in the brands they wear, the phones they use and their Urban Outfitters trendy appearance. So many quote worthy lines in “Nike” beyond the materialism theme. My favorite is toward the end when Ocean confesses, “I may be younger but I’ll look after you / We’re not in love / but I’ll make love to you / When you’re not here I’ll save some for you / I’m not him but I’ll mean something to you.” Oh how I’ve missed sincere lines like that from Frank.

Ivy: The mellow minimal production from ROSTAM and Pharrell Williams was the first thing I noticed and appreciated about “Ivy”. The words take center stage with a dreamy opening line over a light guitar strum, “I thought that I was dreaming / When you said you loved me.” Ocean sings about his mistakes and loss of innocence, “We’ll never be those kids again.” Those simply days have sadly come to an end. Frank keeps giving me lines that resonate with me well after the song ends including: “I broke your heart last week / You’ll probably feel better by the weekend.” When your young relationships can easily end as fast as they began and this line perfectly illustrates that.

Pink + White: I imagine a lovely day with copious amounts of weed when I hear this song. The production from Tyler The Creator and Pharell Williams is so calm and pleasing, nice to vibe out to. There’s even a hint of Beyonce’s  angelic vocals toward the end if you listen close enough.

Be Yourself: When I first heard this interlude I had to take a second because it was way too similar to a voicemail I’d get from my mom when she hasn’t talked to me in a week. I always stop and soak in the words of wisdom whenever “Be Yourself” comes on. Thanks, Frank’s mom.

Solo: “Solo” is my favorite track off of Blond right now. The opening lines are very descriptive and I can picture the scene playing out in my head whenever I hear it. I’m obsessed with the flow and the somber tone of the song. In love with this line, “It’s hell on Earth and the city’s on fire / Inhale / in hell there’s heaven.”

Skyline To: I didn’t notice until I started writing this post but this song always goes over my head whenever I play the album. The music instantly fades into the background of whatever I’m doing but when I actually look into the words, it’s a deep tune. “Skyline To” has Ocean reflecting on how fast time is going especially when you hit a certain age and you realize that you won’t be young forever and you start to look deeper into the meaning of your life. Maybe I didn’t focus on the words at first because I’m still slightly in denial that I’m getting older and have to get my shit together soon? Just a thought.

Self Control: Frank’s vocals are extra tender on this throwback sounding love song. With desires to be the boyfriend of your wet dreams, Ocean mixes drugs with pleasure and leads to some interesting cocaine induced thoughts. Drugs and introspection play a big role in Blond and the lyrics definitely benefit from the heavy themes.

Good Guy: For the most part dating sucks. I’m not sure if it was any better during the time where you didn’t swipe left or right for affection or had to actually talk to someone to learn about them but technology helps us keep a safe distance from getting too close with others. I feel like a lot of people want to feel loved by someone but don’t want to deal with the pressures that come from being in a relationship. I appreciate Frank sharing his date and giving us another example of love in 2016.

Nights: Frank does a lot of rapping on this album and I’m feeling it. His ability to craft interesting stories and thoughts through his lyrics makes it so he can sing or rap and get his point across. I also have to note that clean transition in “Nights” when the beat changes and becomes a chill, thought-heavy night.

Solo (Reprise): Andre 3000 killed it… There isn’t much to say about this one. I feel like Frank Ocean is an artist that could always get a feature from the legend and the “Bombs Over Baghdad” artist never disappoints.

Pretty Sweet: “Now / To the edge I’ll race / To the end I’ll make it / All the risk / I’ll take it.” Short and sweet. I don’t have a long analysis over this track other than I love when the drums and kids together at the end. Beautiful chaos.

Facebook Story: This track has producer SebastiAn telling the story of a miscommunication with his girlfriend because of social media. I feel like there is a lot of strong observations on how devices and social media is controlling our lives and how toxic it can be. Plus Facebook is just annoying to be on anyway with all these political commentators but again that’s another post for the future.

Close To You: This cover of a cover is so good but too short. It’s a nice little vibe to enjoy while it lasts.

White Ferrari: There is so much depth in the last half of Blond. With “White Ferrari” Frank is nostalgic on past love and letting his past love know he’ll always be there, “I care for you still and I will forever / That was my part of the deal / honest / We got so familiar / Spending each day of the year / White Ferrari”. James Blake supplies a sad yet nice outro to the slow farewell to an album that I don’t want to end yet.

Seigfried: The emotions continue to get deeper with Ocean getting realistic about his decisions on “Seigfried”. “Maybe I’m a fool / To settle for a place with some nice views / Maybe I should move / Settle down / two kids and a swimming pool,” Frank contemplates on the sobering track. I’m currently in my 20s and I’m always thinking about what’s next; questioning if I’m making the right decisions in my life. The traditional path of graduating, finding a good job and starting a family seems safe but I never want to go down a safe path. I need adventure. Plus my life has been anything but traditional. “Seigfried” really resonates with me.”

Godspeed: I couldn’t describe “Godspeed” as well as Frank did in his Boys Don’t Cry magazine so here’s a little snippet of his thoughts:

I wrote a story in the middle – it’s called ‘Godspeed’. It’s basically a reimagined part of my boyhood. Boys do cry, but I don’t think I shed a tear for a good chunk of my teenage years. It’s surprisingly my favourite part of my life so far. Surprising, to me, because the current phase is what I was asking the cosmos for when I was a kid. Maybe that part had it’s rough stretches too, but in my rearview mirror it’s getting small enough to convince myself it was all good. And really though… It’s still all good.

Futura Free: The last song and at nine minutes and twenty four seconds the longest track on Blond to end an amazing album. “Futura Free” is a reflective disjointed sounding collection of thoughts. Ocean speaks on everything from minimum wage jobs, fame and Tupac. There are a couple transitions in production that gives the Channel Orange singer a opportunity to spit a few bars and later get interviewed from his younger brother Ryan.

There was an overwhelming amount of anticipation for Frank Ocean to drop a near perfect release after Channel Orange and after multiple visits to Blond, I think he delivered. When I wrote about my excitement for the formerly titled Boy’s Don’t Cry record back in April of last year I had no idea what to expect. Could the man that crafted incredible songs like “Super Rich Kids”, “Pyramids” and “Crack Rock” create an album that could surpass the caliber of his debut studio album? I truly believe he exceeded my high expectations and many others. I love the emotional depth put into this album and how his lyricism is put on the forefront in these 17 tracks. Blond is a personal body of work from an artist that has thrived on his ability to be relatable while keeping most of the private details of his life to himself. When I listen to this album, I hear an artist that isn’t afraid to put himself out on display to be celebrated, hated but most importantly heard. I know most writers churned out reviews for this album as fast possible to get all the clicks and shares possible but like Frank, I wanted to make sure I got all my thoughts out and I shared the most honest piece of content possible. I have no doubt that I’ll be visiting Blond, Channel Orange and Nostalgia, Ultra wondering when Frank will stop the world again and what stories he’ll have to share next. I’m all ears but please don’t make me wait another four years again.

What do you think of Frank Ocean’s long awaited return with Blond? Let me know in the comments!