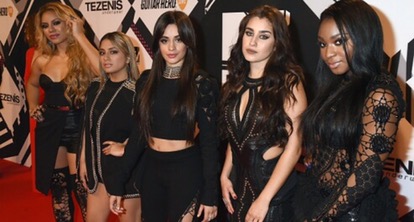 During my hiatus from writing I didn’t get to discuss Fifth Harmony taking their well deserved spot on the pop charts or their solid second album 7/27. I’m sure most of you have spent a lot of time with 7/27 since it dropped in May so a lengthy think piece of the bop-filled record is unnecessary but the bonus tracks might be another story. The U.S. deluxe edition of the album included two slower tracks to the mix which added some emotion and more importantly length to the 10 track album. While “Dope” quickly became one of my favorite tracks on the album, I had no idea that the real treats could be found in Japan and on Napster (Sidenote: who knew Napster was still a thing?).

“Voicemail” and “Big Bad Wolf” are the two tracks that can be found on the Napster and Japanese deluxe edition of 7/27 and they deserve some love from the stateside as well.

“Voicemail” reminds me of popular R&B music from the early 2000s with attitude filled verses and production deserving of all the body rolls. “You have reached / A phone number that is no longer in service for you / So don’t wait for me to call you back / Cause I ain’t doing too bad / Not thinking bout you,” If this came out in 2002 voicemails would definitely have this playing in the background.  Seriously, songs like “Voicemail” and “Not Kinda Girl” are what I expected when Fifth Harmony announced their next album would lean more in the R&B spectrum so it’s good to hear that vision wasn’t completely lost for radio singles.

“Big Bad Wolf” is sexy on levels that I didn’t think the women of 5H were ready to let us in on yet. Over minimal, rhytmic production Fifth Harmony are in control as they let their lovers know body language is always preferred and instincts of sheep need not apply. The rhytmic ear worm reminds of the Pussycat Dolls in their “Buttons” era and judging from live performance footage might be the transition to Fifth Harmony’s most mature era yet.

I’m really hoping Fifth Harmony have a few more albums in them before they push for the solo spotlight. While 7/27 is a good album it sounds like they were testing the waters before they tried dropping a completely mature, one genre spanning, body of work. The diversity of the group and their single choices makes them who they are but their final products always feel a little too safe. Give me more “Big Bad Wolf”, the world is ready for it!

What do you think of 5H’s bonus tracks? Let me know in the comments