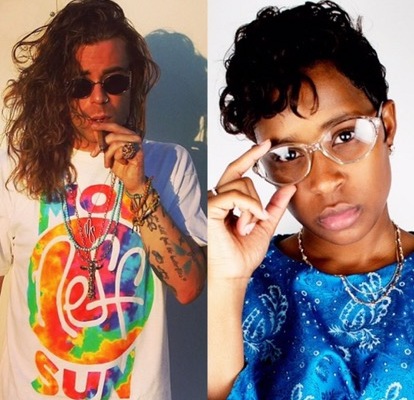 Mod Sun and Dej Loaf are two artists that have been on the grind for a couple of years so I hate that it took this long to really get into their music. Mod Sun (stands for “Movement on Dreams, Stand Under None) has been making music since 2004, drumming for the band Scary Kids Scaring Kids and later becoming a rapper with five solo mixtapes and three EPs under his belt. The Minnesota native  is all about empowerment and peace and like his Detroit collaborator Dej Loaf grew up on some classic music influences. Dej Loaf started her rapper career in 2011 and since then has garnered recognition for her hustle and unique sound she brings to the game.

Fans of rap have most likely heard Dej Loaf’s biggest hit “Try Me” and if Mod Sun’s name doesn’t ring a bell, his collaboratons with artists like Schoolboy Q, G-Eazy and Blackbear definitely should. Basically both of these artists are prime to blow up at anytime so now is good time to get them on your radar. Hopefully their new single “We Do This Shit” will get you prepared. Produced by Bobby Johnson (produced Que’s “OG Bobby Johnson” and Beyonce’s “7/11”) is an infectious trap leaning record about enjoying life and balling like jumpman. Mod Sun and Dej Loaf’s laidback flows made me want to replay “We Do This Shit” after my initial listen and the chill single is definitely going to be added to my rotation for the summer.

Now that I’ve got familiar with these two rappers, I need to go back and do my homework on their previous releases but I’m excited for what they both add to the hip hop game. Dej Loaf is representing for the often underrepresented group of female rappers. While Mod Sun is another example that their isn’t one skin tone or lifestyle that needs to be lived to make good rap music. As long as the music is dope and the artist is authentic, I’m always ready to give it some love.

Will you be bumping Mod Sun and Dej Loaf’s new single this summer? Let me know in the comments!

Stream “We Do This Shit” HERE: