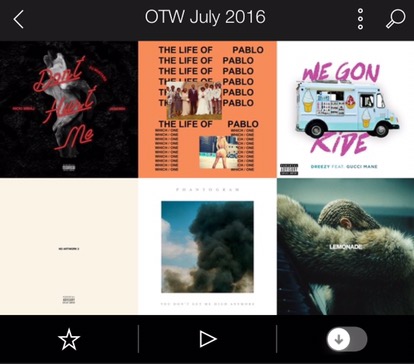 July is quickly coming to an end so a new playlist showcasing what’s currently on rotation for me needed to be posted. While I try to add artists that are under the radar so people can get familiar with them before they take over, don’t sleep on the heavy hitters releasing some quality music. Kanye West, Demi Lovato and Schoolboy Q are a few of the mainstream artists with some big singles while Dreezy, Terror Jr and June’s Diary represent the wave of newcomers that I’m excited to hear more of in the future. But enough with this introduction, let’s get into what you should be listening to this month:

DJ Khaled knows the components of a hit so it shouldn’t be a suprise that “For Free” is the perfect smash for the summer. I mean can you  really go wrong with a Drake feature and a Too Short reference? The answer is NO.

Dev Hynes also known as Blood Orange just dropped his latest musical masterpiece Freetown Sound and I’ve been debating on whether I want to try to put in words why the album is something everyone should experience. “Augustine” is the first track off the album that received a music video and it’s amazing to see and hear everything come together. Seriously take a moment to immerse yourself in Blood Orange’s music, you will not be disappointed.

Last year I became obsessed with Phoebe Ryan through her Mine EP which consists of five pleasantly mellow, pop numbers that showcase Ryan’s writing abilities and excellent music taste (That R.Kelly/Miguel mashup? Perfect). Earlier this month Ryan dropped “Dollar Bill” and the infectious cut has hit potential written all over it. Whenever I hear it I can’t help but replay the pre-chorus “You can (call me), Money, money, money, money, money, money” in my head as soon as it comes to an end.

What are you listening to this month? Let me know in the comments!