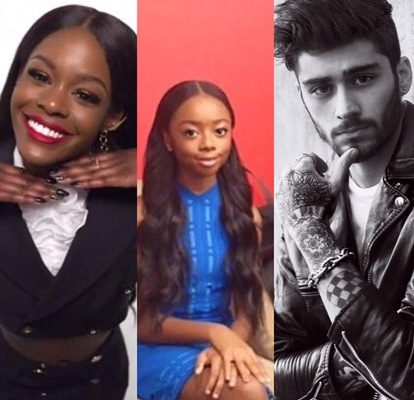 Azealia Banks has become synonymous with Twitter over the years due to numerous rants and beefs but last night’s occurrence has taken her social media presence to new lows (or heights depending on how big a troll you are). This inevitable trending topic began with Zayn premiering a visual for his latest single “Like I Would”. Shot by Director X, the visual brings together Tron suits, a laser light show and a few dance sequences to capture the feel of R&B infused dance track; basically imagine the Tron film and Usher’s classic “Yeah” music video having a baby (after some #Pillowtalk of course). A few hours later, as the video began racking up views on YouTube, “Ice Princess” of rap and formerly retired Twitter user Azealia Banks pointed out Zayn might have gained some inspiration from her “Chasing Time” music video…

After calling out the now solo artist, Zayn fired back at Banks by telling her she was reaching but one does not get into a fight with the Harlem native and expect to have the last tweet. As the day continued Banks flooded her timeline with racial slurs, album reception comparisons and some self-promo because any press is good press. Cellphone numbers and Facetime emails got leaked, artists demanded Banks get removed from the upcoming Hackney Rinse, Born & Bred festival and just when you think there is enough ammo to keep the Directoners (1D stans) and Kunts (Azealia’s fanbase) battling for days, a Disney Channel star adds herself to the mix.

When bae says "I think we should see other people" pic.twitter.com/xMQTzETIK8 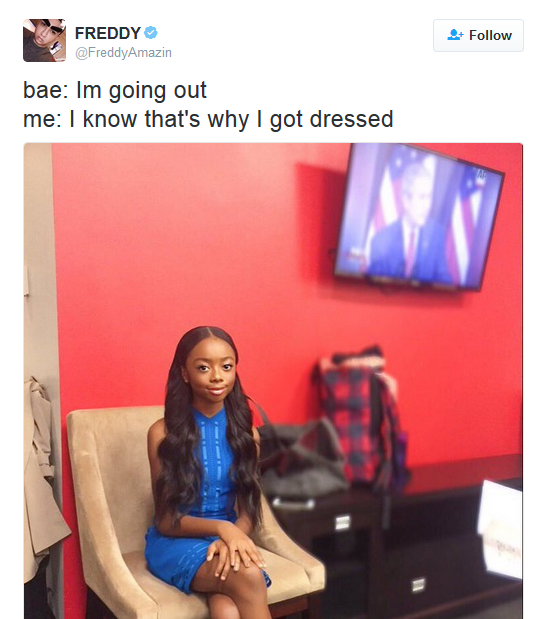 If Skai Jackson doesn’t ring any bells, maybe the countless memes of the 14 year old actor will help. Jackson took to Twitter to let Banks know she needs to “simmer down a little,” because why not? Azealia obviously has enough fire to burn anyone who gets in her path and the SECOND fight that goes down is even more cringe-worthy than the original one. Now that you’re all caught up, I need to let out some thoughts on this Twitter confrontation that went way too far.
First off, Azealia…I know you’ve heard (and said) it all before when it comes to culture vultures and white washing in the industry. You’re easily one of the most exciting/dope artists in the game. When you hit a stage or drop a song it’s amazing and some people can get pass your distracting online presence and see the underrated talent you truly are. Seeing mainstream artists steal your concepts and automatically succeed from their clout alone has to be irritating but when you spew out racial slurs yet make stirring speeches on the racism all black people (especially women) face you become the worst kind of hypocrite. Sure the system was built against minorities and you literally don’t owe anyone anything but I don’t see how people try to advocate for equality yet are quick to cut down other minorities fighting for the same things.
Even if Banks solely sees these beefs as forms of entertainment and a way to promote her image, what’s the end goal? Being able to have complete control as an independent artist is one thing but I wonder if she plans to go beyond that one day. Zayn leaking Banks number is petty to the extreme but I think the person that confuses me the most in this situation is Skai. 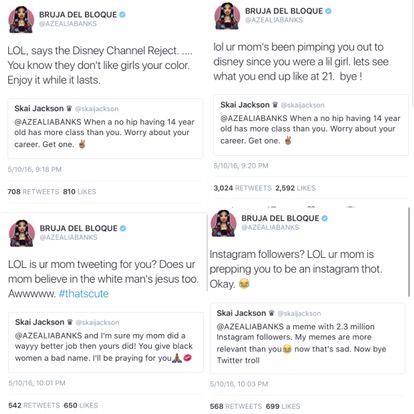 Let’s forget about Skai’s preteen fanbase that definitely got a nice introduction to Banks if they weren’t aware of her already or that she at 14 she’s pretty much a pre-teen herself; was it even slightly necessary to not only insert yourself in the beef and use a meme as an example of your relevancy. I know Banks replied with some hateful shit (staying on brand) but this was a fight that was even more unnecessary than the first one over some demonic colored contacts.

Like all pop culture news, this will die down in a couple days when the next story eclipses it but sometimes I’m blown away by how people choose to use their influence.Don’t get me wrong I like a good laugh from the trash that comes from the internet as much as the next nobody, but instead of using a moment for education, people rather add more animosity to this world full of hateful people. What a time to be alive.

Slight-rant over sidenote: Azealia Banks ending the drama with a Periscope dance party is why some love her and others love to hate her. I’m rooting for her talent either way.

What do you think of the Azealia vs. Zayn vs. Skai beef? Let me know in the comments!