I don’t know why I’ve been slacking on reviewing one of the best albums of 2014 Broke With Expensive Taste released on November 6th. Azealia Banks is back on the blogs and gossip sites because of her views on Iggy Azalea, the appropriation of black culture and trying to hold on to the essence of hip hop music. Banks is not new to twitter rants/beefs and I usually don’t pay much attention to them other than a few hilarious tweets but her recent Hot 97 interview was very insightful. I already loved Banks music but I have a new appreciation of her views and wanting to speak freely about a corrupt system that’s not changing anytime soon.

I don’t want to write too much on the internet drama since it can easily be googled but I wanted to add my two cents on the current Azealia vs Iggy beef. Before you automatically call Banks a bully because of how she chooses to address her opinions on the music industry, watch an interview, read an excerpt of her views beyond calling Iggy an Igloo. While I don’t agree with how abrasive Banks can be with her twitter-enemies, if you look beyond that you see that her anger isn’t just about Iggy being at the top of the charts. Don’t blindly follow the person that is currently being shown well in the press. I’m a huge fan of both artists but I can acknowledge music that is good and music that will sell. Now let’s get into Azealia Bank’s highly anticipated debut album Broke With Expensive Taste.

Banks started working on this album back in 2011 when she was an independent artist. After the success of her first single “212” in 2012, Banks landed on numerous ‘artists to watch lists’ and got a  two deals with Interscope and Polydor Records. I remember seeing tweets back in 2012 of Banks excited to share her album with the world and having a few release dates during that time but the labels didn’t know how to push the music. Banks was killing it at the biggest festivals and her fan base quickly grew with the help of mixtapes and EPs but release dates passed and still no progress. Banks angrily took to twitter to vent her feelings on her label situation and a ton of beefs with artists during that time.

Two years later, Banks cut ties with her labels and signed to Prospect Park, an independent label that let Banks gain control over her career.  Four months later Broke With Expensive Taste came out and it instantly blew up on the charts with the help of twitter and her kuntbrigade (The name of her dedicated fan base).

Broke With Expensive Taste is one of the most ambitious records I’ve heard in a while. Banks infuses every genre under the sun from Rap, House, Jazz, Surf-Rock, Pop, R&B, to Caribbean music, I couldn’t imagine a rap album being this inventive.  The album starts with “Idle Delilah” an infectious cut with Bank effortlessly singing over a glitchy-bouncy production. When Banks starts to rap I think about her mid-tempo tracks off of Fantasea, and this is the perfect way to start an album. Next “Gimme A Chance” commands your attention with Banks immediately spitting some bars before your ears have a chance to embrace the horn driven track. The record scratches gives the track an old school feel and just when you think “Idle Delilah” is making sense, Banks starts singing Spanish while grooving over the  smooth beat (Who knew she could sing in Spanish? I’m impressed Azealia!). 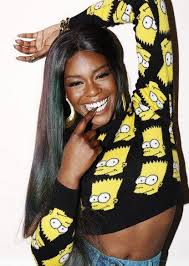 Hot 97’s Peter Rosenberg introduces the next cut “Desperado”, where Banks spits back to back fiery bars over a strange drum heavy beat. I love when Banks raps to quick, snappy beats like this and I had to listen a couple times to actually understand what she’s saying throughout her rapid fire verses. Theophilius London makes an appearance on “JFK”, a house cut that sounds like the soundtrack for wasted ravers on a dance floor. I’m digging London’s contribution to the track and production from Boddika takes you on a trippy journey through the five minute track. After that Banks takes us back to her Harlem roots on “212”, a mid-tempo, banger that never gets old.

“Wallace” has insane production from Young Skeeter and I love how Banks rides the beat on this one. Motorcycles revving is the start to “Heavy Metal and Reflective” an aggressive track that has Banks spitting over a crazy beat from Lil Internet. This was one of the first tracks I head from Broke With Expensive Taste and it still sounds fresh. I love the aggressive tone to the record. “BBD” comes in next sounding just as aggressive as the track before it. Banks flow is sick and I’m obsessed with the complexity in the track’s production. Banks tends to have a lot going on in her production and her word play but it never seems overwhelming.

The next track “Ice Princess” has to be my favorite track of the record. The up-tempo cut that samples Morgan Page’s “In the Air” has Bank spitting some icy flows to match the chill production. Imagine living inside the insanely successful animated film Frozen, if the soundtrack was just trap beats and Azealia Banks was ice queen. I would love to see a visual for this track (other than the Frozen rewrite I created in my mind). “Ice Princess” definitely has single potential, if Banks even cares about mainstream success anymore.

“Yung Rapunxel”, one of the most disturbing music videos I’ve even seen is next and the track is 90s house meets your worst nightmare. I love the chorus that has Banks yelling over the industrial production. I think I like hearing the song more than watching Bank’s eyeballs turn into rapping mouths (Seriously you need to experience that video at least once). The next track “Soda” is a big shift from the aggressive “Yung Rapunxel”. Banks sings over some bubbly production and is one of the tracks that is most easy to listen to if your just getting into Azealia Banks music.

This track was set to be the lead single before Banks left her label and I could understand why. I could see “Soda” being embraced by the mainstream but I’m glad Banks didn’t go the safe route with releasing this as the first single.  Banks crafted the next track “Chasing Time” after her label told her she needed to record a “hit” for the album.  The track sounds like a hit to me and I love knowing the background of this song. Banks really felt like she wasted so much time with a label who misunderstood her. “Luxury” is one of my favorite cuts from Banks mixtape Fantasea. I’m glad it found a place on the album for the people who probably overlooked the 90s inspired track. Banks flow on this track is so slick and I love when she sounds this effortless. 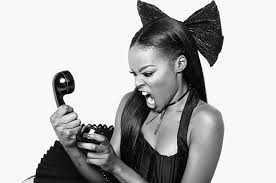 “Nude Beach a Go-Go” may be one of the biggest surprises on any album released recently. Banks takes us all the way back to the 60s on the Ariel Pink produced track. I never thought I would hear Banks create a surf rock record but she sounds amazing and makes me wonder if this could’ve been a hit back then. I wouldn’t mind hearing another 60s inspired track from Ms. Banks. “Miss Amor” is a solid house vogue ready cut and I’m digging the production on the track. Honestly I love the production throughout the album, Banks really honed her sound over the years and she’s created something so unique and refreshing after a year of DJ Mustard beats from everyone. “Miss Camaraderie” ends Broke With Expensive Taste with Banks doing what she does best, owning a boisterous beat and adding some sweet vocals throughout.

I can understand Banks frustrations with the music industry after creating an album like this. Broke With Expensive Taste is a game changer for the artists who still feel the need to put hip hop in a “urban” box and Banks really proved herself as a rapper. From production by producers that definitely aren’t known outside taste makers circuit to intricate wordplay and even arranging the live instrumentals in the album, I hope this album can get Banks some well-deserved recognition as an artist in the New Year. I know that some people don’t get why Banks can’t keep her mouth shut when it comes to social media and focus on her craft but we don’t need another artist filtering their views and playing it safe for the money. We need more artists that are inspired by their work and more execs willing to take a chance on the Azealia Banks of the world. Lets hope we don’t have to wait another four years for another Banks record.