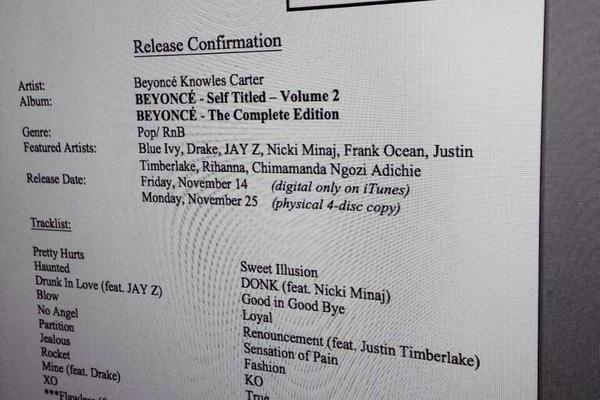 I can easily visualize what I was doing around two a.m.on December 13th, 2013. I was back home at Kalamazoo due for winter break chilling on the couch. As I drained the data from my phone, scrolling through tweets (Typical Friday night), I suddenly saw a link for a Beyonce album appear on my timeline. I clicked on it, very confused on how this could be possible when I, a person who constantly knows what’s going on in the music world hadn’t heard about a actual release date for the album. As soon as I saw that the link was legit and there was a Beyonce “visual” album with 13 tracks and 18 videos, I instantly bought the album spending the rest of the night trying to get everything to download over crappy t-mobile service.

I still revisit most of the songs on the album. For most of the summer, you couldn’t avoid Drunk In Love because it was being played every where (SURFBOARD). I’m surprised songs like Mine or XO didn’t get the single treatment but who know’s what Bey may have up her sleeves.

With brilliant hackers being able to leak whatever they can get their hands on and tons of news sites searching for their next story, it’s almost impossible to surprise the public with the release of an album cover so forget about releasing an whole CD but Queen B pulled it off and it looks like she’s ready to give us part two of her self titled album.

Beyonce’s Parkwood team couldn’t keep this CD under wraps as well as the first one with the leak of a release confirmation that gives details on what to expect from the next album. Don’t get your hopes up to high because this confirmation isn’t official so this could just be someone that likes to play sick games but if its true Beyonce definitely isn’t pulling any punches.

The photo states Part 2 will be released through iTunes on November 14th, while a physical 4-disc copy will be available a few days later on November 25th. Expect features from Nicki Minaj,Justin Timberlake and Rihanna plus ten more music videos to complete the self titled experience. A Rih-Bey collab has been rumored for months which would be a great to hear and an even better thing to see if they did a music video together. The song their rumored to collab on is called “Cherry” which a snippet of it can be heard on the end of Blow.

I’ve already played the insane Flawless remix featuring Onika hundreds of times so hearing another song with those two would be amazing. It would help me understand why Nicki decided to push back her highly anticipated third album “The Pinkprint” that was originally slated for a November 24th release. If Queen B is suppose to release an album a week before, it would make sense why you wouldn’t want to release your album the next week.

I’m not getting my hopes completely up for the release of this album but I’ll definitely be checking twitter on November 13 toward midnight to see if I’ll need to shell out any money for the new album.

Do you guys think this confirmation is real? Are you excited to hear part 2 of Beyonce’s album? Let me know in the comments!